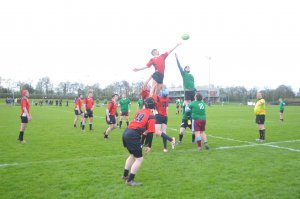 The second half of the Team Leicestershire rugby produced a frantic night at Leicester Grammar School with four more champions crowned.

With the Under 16's and 18's battling it out in both the Cup and Plate finals for their respective ages, the chance to pick up glory was available for seven different sides.

Kicking off with the U16 & U18 Plate finals, Hinckley Academy beat The Lancaster School 24-15 in the earlier action, with Ashby School losing 32-8 to Robert Smyth Academy in the U18 final.

The only school with two sides, Ashby School's night was one to forget as their Under 16 team were cruelly denied in the final minute. Facing off against Lutterworth High School, they relinquished a 25-23 lead in the final minute as a converted try saw the tie turn on its head to finish 30-25.

The U18 Cup final rounded off the evening and hosts Leicester Grammar were well beaten in a low-scoring contest. Welbeck Defence Sixth Form College notched up 20 points to Leicester's five as the rugby came to an end for the campaign.

There is still plenty of Team Leicestershire action to come though. Following the basketball finals on 2nd April, the action goes back outdoors in May with Girls Football at the University of Leicester. And when the sun comes out so do the stumps, with the cricket finals taking place in the middle of June.

Team Leicestershire is the umbrella Association for all traditional competitive school sport in secondary schools across Leicestershire, Leicester City and Rutland.

Images of the Team Leicestershire Finals are available on our Facebook page - Leicester-Shire & Rutland Sport. Make sure to keep up with all the action over the coming months through our Twitter - @lrsport, Instagram - @lrsportcsp and Snapchat - lr_sport using #TeamLeicestershire.